What has the Savory Institute got to do with Paleo?

Six months ago I had no idea who Allan Savory was. Fast forward to a week ago and I was sitting at the Savory Institute World Conference in London, knowing that I had found something very, very special…

That’s life – full of twists and turns – but more importantly that’s Paleo. Starting my Paleo journey had led me to learning about pasture-raised meat, to avidly listening to Joel Salatin videos on Youtube and to a chance exchange of a few words with Robb Wolf at Paleo f(x) in Austin. It was Robb that told me about the conference so yet again in my life, thank you Robb…

I have worked within various environmental organisations and campaign groups over the years, including the National Parks in London and Wales and volunteering to work with the Campaign to Protect Rural England on their Local Foods project and other campaign issues. I have always been interested in our connection to the environment from a practical as well as a philosophical viewpoint and love the work of Roger Scruton, who writes so eloquently about our relationship with this land we call ‘home’.

From a small child growing up in East London I was fascinated by farms and all things ‘countryside’.  My toys consisted of plastic farm animals rather than dolls and I would read avidly on wildlife and dream of living on a farm.  Later as I grew up I did my best to get out of London as soon as I could, but it took me a while – too long in fact. Living here in the Brecon Beacons, surrounded by some of the most beautiful scenery in the UK and in prime beef and lamb country, I have taken one step closer to the source of my food, but that is not enough. Truly connecting with our food choices means not only knowing who produced it, but how they produced it and whether that system is sustainable and beneficial for our environment and for our health.

My interest in Paleo made sense in terms of conscious food choices and supporting localism, but it wasn’t until I attended the Savory Institute Conference that I felt as though the circle had truly been completed.

For those of you unfamiliar with the work of Allan Savory, his 20 minute Ted talk in 2013 caused quite a stir and put the work of the Savory Institute firmly at the forefront of the environmental news. The philosophy behind his work is one of holistic management and of mimicking the large-scale movement of stock over land to regenerate growth and to heal the soil – movements that we would have seen thousands of years ago when ruminants crossed the land in vast numbers.

Allan Savory’s ideas have come in for criticism in some quarters. However, embracing Paleo has made me question many aspects of mainstream opinion related to health and in the same way, I question the received wisdom on how best to manage the land and provide our food. Challenges to the status quo are not kindly received, be they in health or environmental issues and there is no doubt that the Savory Institute (just as Paleo) has some formidable enemies waiting in the wings. But this should not deter us. Many great ideas have been subject to intense criticism before gradually becoming accepted into mainstream thinking.

The conference brought together land managers from across the globe – Africa, Mexico, Argentina, America, the Netherlands, the UK to name just a few – together with representatives from various environmental and health organisations and movements (Paleo included). It was amazing to see such a diverse group of people uniting around an idea (and practice) and as the conference progressed, it became clear that the work of the Savory Institute signals a shift in the way we think about agriculture, our relationship to the land and the food we eat. Things are at a tipping point and we do not have much time to begin to reverse some of the devastating damage that we have wrought on the environment in the pursuit of food over the last 10,000 years since the agricultural revolution.  This movement feels powerful and many of the people that talked over the course of two days were nothing short of inspirational.

The importance of pasture-raised meat to the Paleo movement cannot be understated. The range of health benefits are of course extremely important, but added to that is the way in which responsibly farmed, grass-fed livestock has the potential to heal the land and regenerate not only the flora and fauna within it, but the soil itself. The health of the soil mirrors the health of our gut – indeed this was discussed many times during the conference – and we ignore both at our peril. This subject gets talked about a lot within Paleo. As we cannot heal the body without feeding the gut microbiome with good bacteria through responsible food choices, so we cannot heal the land from the devastation of desertification without returning nutrients to the soil through the practice of responsible livestock management.

The people that I met were concerned about the health of their families, of their animals, of their communities and of the environment. They ranged from young environmental studies students to farmers in their 80s, from people who made their living on the land to people who wrote about the land, from butchers to shepherdesses, from vets to publicans, from Weston A Price to Paleo, from people who tended small vegetable plots to land managers overseeing thousands of heads of cattle over thousands of hectares.  This was a conference that brought them all together and united them under one movement.

The producers of pasture-raised livestock have a unique opportunity to join forces with Paleo and to bring the benefits to a wider audience here in the UK. I for one will do everything in my power to help that happen and to make the work of the Savory Institute better known. I don’t have a farm, I don’t have the money to set up a business, but I can write and I can talk and maybe that can help. The conference was the next step on a journey that started for me with a love of the environment, and then a complete passion for Paleo. It joined together the dots and now I can see the bigger picture for the first time.  All of the elements have suddenly slotted into place and the work that needs to be done is now clear. What an amazing experience…

See my notes – links below – for summaries of the various talks that I attended and check out the Savory Institute website for more information about their work. I have written my notes as I took them. I am afraid that they do not convey the atmosphere and the passion of the speakers but I hope they go some way towards encouraging people to find out more about the work of the Savory Institute.

A Conversation About the Power of Regenerative Agriculture:  Darren Doherty, Creator of Regrarians, Ltd.

A Conversation About the Power of Regenerative Agriculture: Patrick Holden, Founding Director, The Sustainable Food Trust

A Conversation about the Role of Science in Informing Management: Panel: Richard Teague, Jason RownTree, Chad Krueger, Hannah Gosnell, Peter Byck. Closing by Justin Adams “If You Want To Go Fast Go Alone, If You Want To Go Far, Go Together”

Keynote Address: A Conversation about Inspiring a New Generation of Farmers Who Want to Feed the Future: Introduction by Lisa Heenan of Regrarians, Joel Salatin, Polyface Farm, Author, Fields of Farmers 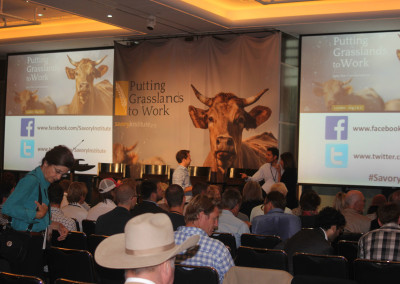